So Where To Now?

After one of the longest bull runs without a 10% correction (45 months – the 3rd longest in history much) fundamentals and mean reversion are back in control. Whatever the excuse markets will find a way to mean revert and expunge exuberant investor behaviour.

So what are the catalysts for this correction, where are valuations and what is the outlook for investment portfolios?

The search for yield and aversion to negative real returns from cash courtesy of global central banks forced investors into higher risk assets. Emerging markets bonds , global equities and real estate were the biggest beneficiaries. Then the basic human behaviour of greed took hold with record levels of margin loans in the US and China fuelling excessive valuations.

Margin loans in the US are approximately 2.7% and has likely played a part in the 45 month bull market (see chart below).  The Chinese have approximately 3.5% of the total market cap in outstanding debt, this has spurred a 136% rally in their index, however has also likely played a part in the sudden 41% correction that has recently occurred.  Interestingly, the 3.5% Margin Lending to Market Capitalisation ratio is the same level that Australia peaked at prior to the GFC. 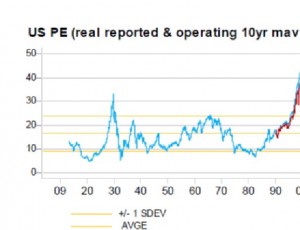 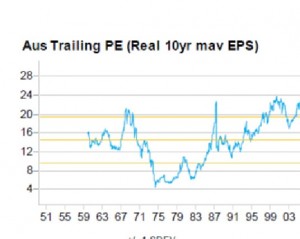 The Chinese authorities did little to stop the speculation and when the balloon burst they mistakenly tried to prop up the market. So much for their desire to allow market forces to be in control. Credibility has been lost.

And that is the big issue: Central Bank credibility.

Eight years in from the global financial crisis global growth remains weak despite the huge money printing negative real interest rates orchestrated by global central banks.  There is little to show for these policies. Global debt levels remain at record levels , see chart, asset prices have been inflated above fundamentals see charts and interest rates cannot go any lower. There’s no ammunition left, besides attempting to devalue your currency.

So where are we regarding absolute valuations?

Shiller PE’s  (a ratio of price to the average 10 year earnings, also known as cyclically adjusted PE or CAPE)  suggest that Australian equities are approaching fair value.  US equities on the other hand, still look relatively expensive despite the recent weakness.

Forwards PE’s  suggest that World and US equities are also approaching fair value.

So where to now my friend?

Continuing market volatility will be a feature with wild oscillations as day traders , computer trading algorithms and headlining press articles leading the way. Value investors will be alert for opportunities in quality equities that get caught up in any sell programs or get dragged along with poorer quality companies. Short term investors will follow the usual pattern of behavioural finance and sell assets at the bottom and revert to cash as the markets correct. There will be some collateral damage although we won’t know where that is until it is.

Oh and that brings me to the oil price. The collapse in the oil price is eventually stimulatory for the global economy. Costs for manufacturing and transport will plummet.

The current environment is a reminder of how day to day movements in market are totally irrelevant to long term investment planning.  We continue to urge people to look through the short term noise.  At Providence we have been running 15-20% cash weightings , increased exposure to alternative funds that benefit from higher volatility and been running a short AUD exposure for international equities. This strategy has been successful in dampening volatility and protecting the capital value of investment portfolios.

The key now is having the confidence to deploy that patient capital once value emerges…..as long as we have faith in the global central banks!